Black History Month According to a Haitian American

My name is Luc A. Gabriel and I am a Haitian-American from Philadelphia, PA. To me, Black History Month is not solely a time to learn about African-American history, but rather a time to learn, teach, and celebrate African history and culture throughout the diaspora experience. This includes Afro Americans, Afro Caribbeans, and Afro Latinos.

My parents came to America at the end of the 1960’s and settled in Pennsylvania, mainly because Canada was too cold for my father. And if you let my mother tell it, he could have lived in New York City but she wasn’t having it. So Philly it was! There they raised my two older sisters and I in a Haitian household adapting to an American lifestyle in an African-American community.

I grew up learning Haiti’s rich history and culture at the dinner table and family gatherings. I loved hearing how we came from a people who liberated themselves to establish the first black republic in the western hemisphere. These stories helped foster a passion to learn more about others and a pride within myself, which inevitably piqued my interest in how the diaspora storylines intertwine as a whole.

As a child I wasn’t able to fully relate to what was being taught in school and was slightly embarrassed for being from another culture. Some might say I had nothing to be embarrassed about, but we all know that children want to fit in rather than stand out. Besides, contrary to current pop culture, Haitians and Africans weren’t treated with much respect back in the 1980’s and 90’s.

Now, every year, I reflect on my ancestry. Especially on January 1st, which is Haiti’s Independence Day. This allows me the opportunity to dive deeper into my heritage and identity, particularly in preparation for the month of February. These moments of intentional reflection help me come to understand the importance of viewing history from an Afro-American and Afro-Haitian perspective. This allows me to read between the lines of history and see the links that bind both cultures together.

After taking an African American History course, I realized that Haitians have made great contributions to the birth of this nation. One notable person was Jean-Baptist-Point Du Sable, who is considered the Father of Chicago. He established a successful trading post in the 1770’s allowing the area to thrive and grow.

Most recently, I discovered that one of my favorite black heroes, William Edward Burghardt Du Bois was an Afro Haitian American. W.E.B. Du Bois was a civil rights activist, leader, Pan-Africanist, sociologist, educator, historian, writer, editor, poet, and scholar. His pioneering sociological research of Philly’s urban community, published as The Philadelphia Negro: A Social Study, made a huge impact on my life. The first time I found his book on a library shelf it immediately sprung my desire to educate others on Black History and how we play a major role in society. 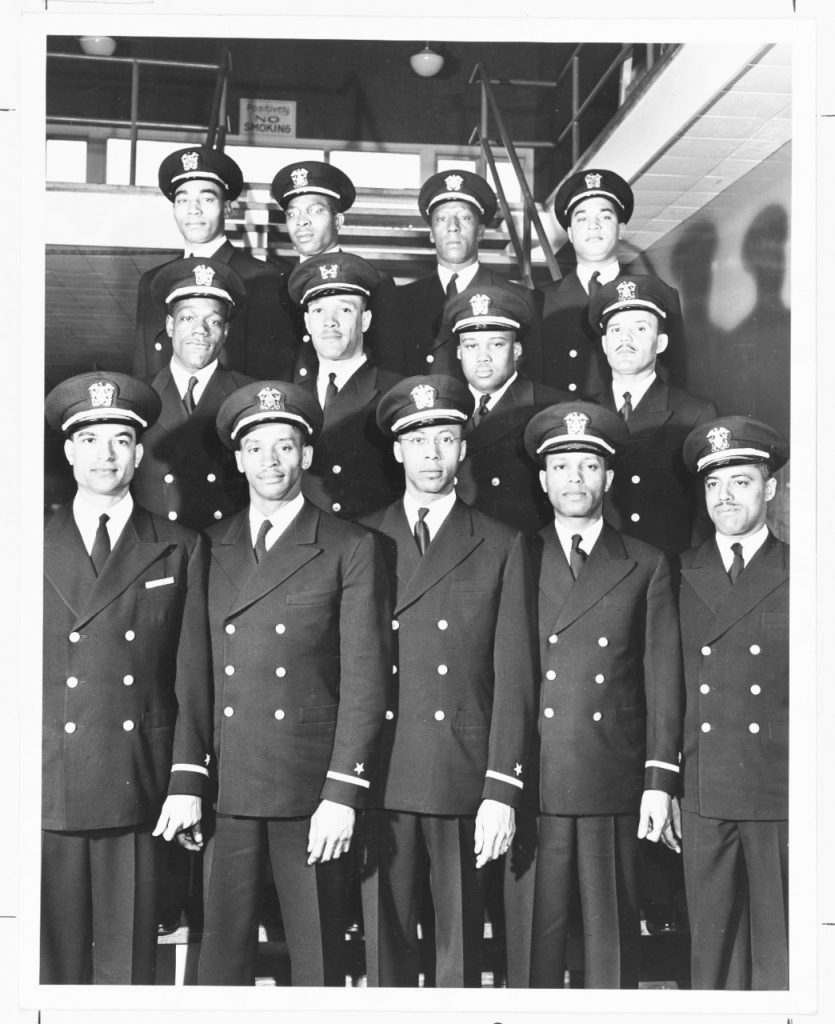 African Americans in the Military

But Haitians have also participated in the military efforts of the United States. Early in my military career, a mentor told me about The Golden Thirteen.These men were enlisted Sailors who became the first African-American commissioned and warrant officers in the U.S. Navy. This prompted me to consider the possibility of walking in their footsteps, not just to become an officer but to make an effort to teach the relevance of black sailors’ contributions to the Navy.

Sailors like John Henry (“Dick”) Turpin, Chief Gunner’s Mate, who was one of the first African-American Chief Petty Officers, and Joseph Anderson, who was among the first medical Sailors to serve as a Loblolly Boy (precursors of today’s Hospital Corpsman), are all examples of African American men dedicated to serving their country through military service. The contributions of these African American men inspired me, a Haitian American, to join the Navy adding to the historical reality that both African Americans and Haitian Americans have participated in the military endeavors of this country. In fact, During World War II, Raymond Cassagnol, Alix Pasquet, and Philippe Celestin were three Haitian officers amongst corps members selected to train as fighter pilots, becoming Tuskegee “Red Tail” Airmen.

Haiti has also played a crucial role in the fight for freedom here in the United States. From the freed blacks who are immortalized in Savannah Georgia for fighting alongside Colonists and French troops in October 1779 to the revolution on its own soil that prompted the Louisiana Purchase in 1803, Haitians have influenced and participated in the fight for freedom on American soil. This is particularly seen in the many slave revolts inspired by Haiti’s successful revolt in 1804.

The most famous slave revolt in the U.S. was led by Nat Turner in Southampton County, Virginia in August of 1883. But The New York Times article “Nat Turner was Far From Alone” documents that the largest slave rebellion in the United States was led by Charles Deslondes in New Orleans, Louisiana in 1811. The article cites that, “Deslondes had been inspired by the example of what is now Haiti, where a three-year slave uprising led by Toussaint L’Ouverture prompted the abolishment of slavery in 1794 and the end to French rule.” This kind of information is so important to know and share because it shows that African American history is also Haitian history. Even though borders and colonialism separate us, Africans in America and the Caribbean were being influenced by one another to challenge their oppressor’s and rebel towards freedom.

As an Afro Haitian American I carry a deep rooted pride and love in my spirit for my history and culture. This has been passed down from my ancestors all the way from the shores of West Africa reaching deep into the various countries within the Motherland. This is why to me,

Black History means a time to celebrate, teach, and learn stories that have traveled far beyond these shores and find roots deep throughout the global Afro diaspora experience.

They Quote It, But Do They Believe It?

Because imperialists have used it to crush dissent ever since Constantine baptized the Church into Romanism and militarism; and now Jefferson Beauregard Sessions, III, and some Evangelical preachers are reviving the use of it; and because it is a serpentine slander of the life and teachings of Jesus; we cannot let their use of it disappear beneath the latest deluge of distractions.

What is it? It is the misapplication or the “scriptorture” of Romans 13:1-4, most recently used to rationalize the separation of families of immigrants and asylum seekers. It has been a reliable tool of “Christian” colonizers for the last 500 years. They used it to justify unjustly wresting two continents from their indigenous peoples, and then worked the newly acquired land with enslaved Africans.

Belief in a Higher Power

Want to know what’s amazing about it? While wool-covered wolves (see Matthew 7:15; Acts 20:29) misrepresent this passage’s alleged command for compliance, they don’t actually believe or practice it themselves. Look at the evidence of resistance:

When leaders have been voted into office by their supporters, it becomes their turn to manipulate the law according to their ideology. As the power shifts from one party to another and policies swing from one side of the pendulum to the other, that’s politics as usual.

When the party in charge, however, tells opponents that they’re carrying out God’s will as God’s ordained agents, then they’ve gone from politics to hermeneutics. They’re proclaiming to do more than just speak for the people who elected them; they’re pretending to speak for God.

What is the basis of their pretense to speak for God? They say Romans 13 claims they’re ordained by God by virtue of being government leaders. If God hadn’t ordained them, they say, then they wouldn’t be in power. Them being in power is offered as evidence that God is speaking and working through them. Expanding from this, it is then argued that only ungodly people would dare to resist and therefore deserve whatever punishment comes to them.

As shown above and repeated many times throughout history, politicians only preach Romans 13 when they are in power and have things going their way. When they don’t like what’s going on, they quickly find a different text.

Since they don’t believe it, don’t you buy it!