Reparations: “What Would Jesus Do?”

June 19, 2019 is forever a historic day in African American history. Congressional members of the House Judiciary Committee heard testimony for H.R.40 – Commission to Study and Develop Reparation Proposals for African Americans Act. Democratic Congressman John Conyers, Jr. first introduced the bill in January of 1989. Believing in the importance of repair and remuneration for the descendants of African American slaves, Conyers consistently reintroduced the bill every year until his retirement in 2017.

Congresswoman Sheila Jackson Lee officially took on the role of first sponsorship in March 2018. Her work successfully got the bill to its historic hearing on Juneteeth 2019. It is because of their combined efforts that in the 400th year since the first African slave was brought over and sold in this country, Congress heard testimony on the importance of establishing a committee to discuss proposals for reparations for slavery.

Witnesses included Ta-Nehisi Coates, writer of the Atlantic article “The Case for Reparations, activist and actor Danny Glover, economist Dr. Julianne Malveaux, Reverend Eugene Taylor Sutton, and others. Their statements, since re-tweeted and leading the news on major outlets, stirred the room as they answered questions from the bi-partisan panel.

“The matter of reparations is one of making amends and direct redress, but it is also a question of citizenship,” Coates said. “In H.R. 40, this body has a chance to both make good on its 2009 apology for enslavement, and reject fair-weather patriotism, to say that this nation is both its credits and debits.”

Coates’ statement targeted the hard question: “why should the federal government be responsible for something that happened in the past?” Many wanted to know, “Why congress?” “Who receives reparations?” “Are there any evidences to the affects of slavery in the present?” But the question that truly grabbed me, came from Democratic Representative Sylvia Garcia. 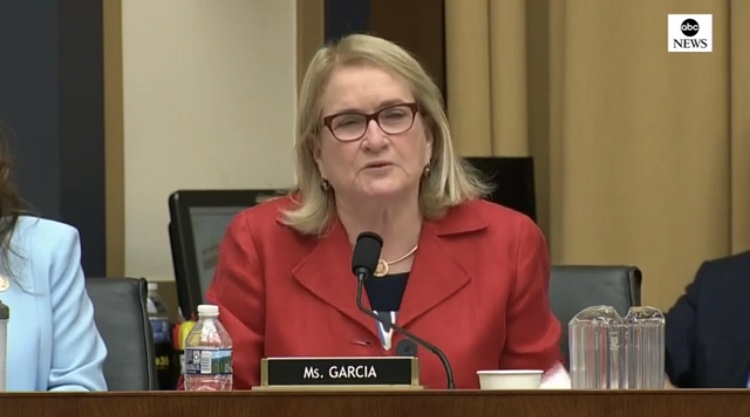 Addressing Reverend Eugene Taylor Sutton, Garcia asked, “what would Jesus do about reparations?” Many immediately groaned in frustration as they saw the question as a distraction from the pertinent economic issues that needed addressing. In fact, one woman yelled out, “separation of Church and State!”

The question came off as a ploy, or a distraction to stall important discussion regarding the historic and economic ramifications of the bill. Thus, to the delight of many in the room, Sutton deflected politely.

“Well, when it comes to those kinds of questions I like to remind people that I’m in sales, not management.”

While the question seemed out of place, the answer missed a great opportunity.

Without compromising principles of church and state, without restricting the religious freedom of any of her hearers, Garcia sought some moral basis in the life of Christ. It was the perfect moment to talk about how Jesus walked this Earth doing nothing but repairing what sin has broken both physically and spiritually. Garcia gave him the perfect opportunity to show that reparations is not a partisan agenda, but a moral responsibility, one certainly found in a biblically based approach to restorative justice. 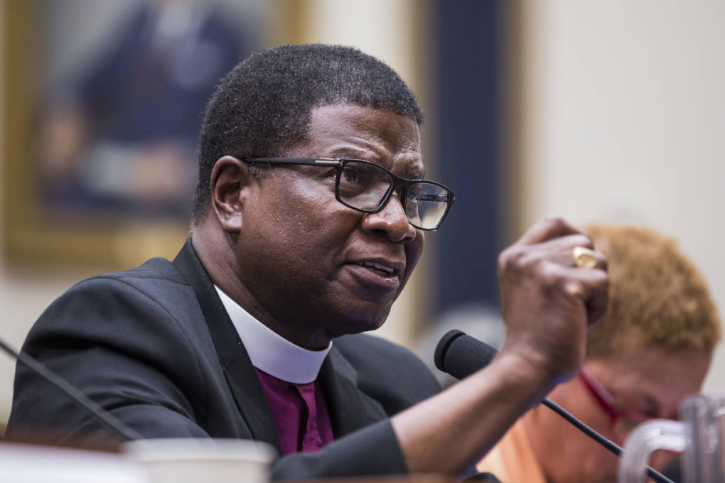 As the Episcopal Bishop of Maryland, Sutton has been working for decades with the Diocese of Maryland on racial justice, reconciliation, and reparations. He wrote a letter to the Maryland Episcopalian Church at large, and on May 11, 2019 he led out in the vote on the historic “Resolution on Racial Reconciliation” at the 235th diocesan convention. The resolution calling “for Episcopalians to study and support the concept of reparations…passed unanimously.” In fact, the Maryland Episcopalian Church reports “the ‘All in favor of this resolution’ call resulted in a rousing voice vote of ‘Aye!’ Then came the ‘All opposed…’ vote. There was complete silence.”

In his letter Sutton quotes Isaiah 58:12 and II Corinthians 5:18-20. It is safe to assume these texts and others were included in his official statement as Congresswoman Garcia says, “Bishop…it really did warm my heart that you have some scripture notes here.” By stating such a compliment before asking the question “what would Jesus do about reparations?” it’s clear she wanted him to speak on some of these Scriptures.

The Biblical Case for Reparations

While Garcia asked specifically about Jesus, we first have to understand this notion within the Bible as a whole. From Genesis to Revelation, Scripture makes a strong case for reparations. It does not explicitly use the term, but it consistently speaks to the holistic repair of people traumatized by sin and injustice, in all of its various forms.

In fact, we’re first introduced to the concept of reparations in the story of Jacob and Esau. Recorded in Genesis chapters 25-33, the Bible describes the story of twin brothers. Genesis 25 chronicles how Jacob takes advantage of Esau’s exhaustion and hunger and gets him to sell him his birthright. But as if that weren’t enough, two chapters later Jacob disguises himself as Esau in order to steal Esau’s blessing.

The Bible says Jacob put on Esau’s clothes, covered himself in sheep’s wool, and made the meal Isaac requested of Esau. Because Isaac was blind he could not recognize that the son in front of him was not Isaac. Perplexed Isaac said, “the voice is Jacob’s, but the hands are the hands of Esau. And he did not recognize him because his hands were hairy like his brother Esau’s hands; so he blessed him” (Genesis 27:22-23). Esau became furious and so Jacob fled Esau’s wrath.

The Cost of Reconciliation

No, please, if I have now found favor in your sight, then receive my present from my hand, inasmuch as I have seen your face as though I had seen the face of God, and you were pleased with me. Please, take my blessing that is brought to you, because God has dealt graciously with me, and because I have enough.” So he urged him, and he took it.

In these verses, Jacob recognizes that his deception and manipulation of Esau was unjust. By giving Esau from the fruit of the blessings that he received through deceit and manipulation, Jacob paid Esau reparations. This is what reparations is about. It is about acknowledging the injustice and repairing and restoring the wounds and the voids that the injustice created.

God Commanded the Children of Israel to Pay Reparations

In fact, reparations is so important that God even commands the children of Israel to do it:

If your brother, a Hebrew man, or a Hebrew woman, is sold to you and serves you six years, then in the seventh year you shall let him go free from you. And when you send him away free from you, you shall not let him go away empty-handed; you shall supply him liberally from your flock, from your threshing floor, and from your winepress. From what the Lord your God has blessed you with, you shall give to him. You shall remember that you were a slave in the land of Egypt, and the Lord your God redeemed you; therefore I command you this thing today.

In these verses, God tells the children of Israel how to treat their slaves. He explicitly commands them not to hold a slave indefinitely, and that when released the slave should not “go away empty-handed.” Unlike Scripture, slaves in the U.S. were held indefinitely. In order to perpetuate this injustice it was written into the constitution that blacks were 3/5ths of a person. This systematically restricted blacks to the position of chattel slave.

“What Would Jesus Do About Reparations?”

According to Luke 4:16-21 Jesus began his ministry reading scripture in a synagogue in Nazareth. Standing behind the pulpit, Jesus read from Isaiah 61:1-2:

The Spirit of the Lord is upon Me; Because He has anointed Me to preach the gospel to the poor; He has sent Me to heal the brokenhearted, to proclaim liberty to the captives and recovery of sight to the blind. To set at liberty those who are oppressed; to proclaim the acceptable year of the Lord.”

Quoting from the prophet Isaiah, Jesus declares that his ministry is to enact the restorative justice of jubilee as recorded in Deuteronomy. He declares that He has come to liberate the enslaved and to restore what oppression has stolen. This commitment to the restoration of humanity and their reconciliation to God all culminates in Christ’s death on the cross. Understanding that sin wounded the human race stripping us of a relationship with the Father, preventing us from operating at full potential, robbing us of any chance at eternal life, and inflicting us with mental, physical, and social enslavement, God knew that a debt had to be paid in order for eternal repair, restoration, and reconciliation. It was for the injustice of sin that God paid reparations in the form of His son Jesus.

Was it God’s fault? Did God personally inflict these injustices on humanity? No! But the beauty of God is that He took responsibility for something He didn’t do. He paid a debt He didn’t owe. All because responsibility was not as important to Him as restoration.

For God so loved the world that He gave His only begotten Son, that whoever believes in Him should not perish but have everlasting life. For God did not send His into the world to condemn the world, but that the world through Him might be saved.

When Jesus died on the cross he said, “I’m willing to pay the debt required. I’m willing to use my life as reparations for the reconciliation of Creation to God the Father.” So when you ask, “what would Jesus do about reparations?” The Bible says He gave His life.

Through the story of Jacob and Esau, the commands God gave the children of Israel, and ultimately the life and death of Jesus Christ, we see that reparations is about acknowledging that injustice exists and being willing to pay the costly price necessary to institute restorative justice and inspire true reconciliation.

As we think about H.R.40 and how our government is seeking to commission a committee of researchers, academics, economists, and activists, we must ponder the Congresswoman’s question. H.R.40 is not a pay out. It is a request that we think about 250 years of slavery and 150 years of systematic oppression through “share cropping, convict leasing, Jim Crow, redlining, unequal education, and disproportionate treatment at the hands of the criminal justice system.” The lens of scripture would certainly be instructive here.

It remains to be seen how reparations for African Americans in this country will work practically. All I know is that the guidance and resolution that we need on this can be found in the Word of God.

I leave you with the pointed words of Ellen White, a prophet, abolitionist, and activist in Seventh-day Adventism who spoke consistently on the importance of uplifting former slaves and their descendants:

“The law of God contained in the ten commandments reveals to man his duty to love God supremely and his neighbor as himself. The American nation owes a debt of love to the colored race, and God has ordained that they should make restitution for the wrong they have done them in the past. Those who have taken no active part in enforcing slavery upon the colored people are not relieved from the responsibility of making special efforts to remove, as far as possible, the sure result of their enslavement.”