One of the cornerstones of the American legal system is the promise of “due process.” Due process guarantees citizens that government will conduct the people’s business with procedures that are legal and fair.

One can find this constitutional protection of due process in the Fifth Amendment and the Fourteenth Amendments. It says: “No one shall be … deprived of life, liberty or property without due process of law.” In a world teeming with injustice, for citizens of the United States, how comforting to know that justice is promised through due process.

That observation made, here’s a question for believers: are the redeemed correct in our expectation that Heaven’s government would afford its citizens protections comparable to those offered by the Constitution’s due process?

What You May Have Missed

I believe the answer is yes. And, it is based on the doctrine of the investigative judgment, a doctrine viewed by many as erroneous, and is uniquely Adventist. Conflicting views notwithstanding, careful review of scripture reveals an implicit guarantee of due process for every child of God.

Due process comes into play whenever the government takes any action that can potentially affect a citizen. The government must first give notice, and provide an opportunity for the citizen to respond to the proposal, or an “opportunity to be heard.”1 Properly understood, the investigative judgment can rightly be recognized as God’s promise of due process.

Most Christians agree that eternal life awaits all who choose to be saved by Jesus. Conversely, many Christians accept the teaching that hellfire awaits those who’ve rejected Jesus. What many Christians overlook, however, is this factor that determines the final disposition of each child of God. The doctrine of the investigative judgment provides clarity on this topic.

May I suggest that the primary reason most Christians have difficulty understanding and accepting the investigative judgment is a lack of understanding regarding the Sanctuary Service God gave Moses. “…[L]et them make Me a sanctuary, that I may dwell among them. According to all that I show you, that is, the pattern of the tabernacle…” Exodus 25:8.

The Sanctuary Service served as God’s kindergarten lesson of salvation. Repentant sinners learned the reality of the words: “For the wages of sin is death…” (Romans 6:23). Likewise, the Sanctuary was a primer for learning the reality that “… without shedding of blood there is no forgiveness” (Hebrews 9:22).

Through the Sanctuary, sinners became intimately acquainted with the deadly consequences of sin. Sinners took their sacrifices—usually a lamb, without blemish to represent Jesus, the Lamb of God—to the sanctuary.

With the help of the priests at the Sanctuary, the sinner would place his hands upon the head of the animal, and then confess his sins against God. Symbolically, the sins then transferred to the animal, which the sinner slayed by his own hand. The blood of that sacrifice was collected, then sprinkled by the priests before the veil separating the Holy Place from the Most Holy Place. The Most Holy Place housed the Ark of the Covenant with the Mercy Seat.

My reward is with me to give everyone according to his work.

Shedding and sprinkling of blood was a daily function of the Sanctuary. However, one day each year, on the day of Atonement, the High Priest would go beyond the veil and enter the Most Holy Place. His role on that day was to cleanse the sanctuary of the sins, represented by the sprinkled blood, that had accumulated over the course of a year.

With Daniel 7:9-10 as our backdrop, we’re granted a glimpse of what most Biblical scholars agree is a snapshot of a heavenly judgment scene. Daniel sees the Ancient of Days (God the Father) seated on His throne, as the court was seated and the books were opened. Then in Daniel 8:14 the prophetic word declares emphatically that the Sanctuary would be cleansed by our High Priest, Jesus. Biblical reckoning placed the time of that cleansing in the year 1844, marking the beginning of the investigative judgment period. Remember, the Sanctuary on earth like the Sanctuary in heaven, was about judgment and redemption.

Judicial Review of Your Probation

Many reject the investigative judgment as simply unbelievable. Which prompts this question, why would belief in the mediatorial work of the Lamb of God on behalf of fallen man in the Holy of Holies in the heavenly Sanctuary, be any less believable than the atoning sacrifice of the Lamb on the altar of the Cross.

Some reject the investigative judgment because those words are not found in Scripture. A true point, indeed. However, equally undeniable is that we do find in the mercy of God due process.

Shakespeare reminds us that “a rose by any other name would smell as sweet.”2 So, call it a judicial review. The Sanctuary motif provides that prior to God granting each of His children their reward, there shall be a judicial review of each life.

Since 1844 this review has been underway. The time frame—or the long probation—is long, not for God’s sake, but ours. Evidence of this Divine due process is found in John 5:28, 29 which speaks of rewards for those who’ve done good and for those who’ve done evil. We find due process in Revelation 22:12 reminding us that He comes quickly and, “… my reward is with me to give every one according to his work.”

There must have been a review of each case. In the absence of a judicial review, there would be no justification for the saints declaration of Revelation 15:3 “… just and true are Your ways, O King of the saints.”

DONALD L. McPHAULL, M.S.W., has enjoyed 30 years of ministry and is currently the senior pastor of the Ephesus Seventh-day Adventist Church in Los Angeles, California. 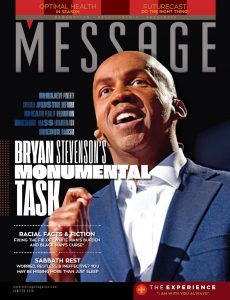 This article is part of our 2019 January / February Issue
Subscribe –>