What is Love? Who is love? How do you love? Maybe you’ve asked one of those questions. At least, you have heard them asked at some point or another. What if I told you that justice and love in the Bible are the same? Would you believe me? Let us journey through this experience as we find out how God’s love in you can bring justice and save life.

We are introduced to a man in Mark 3 who has a visible difference that alienates and marginalizes him in society. In his time, he had no business being in the synagogue, and his exclusion stemmed not from his actions, but because of something over which he had no control. Can you imagine being pushed to the sidelines of society because of some outward thing that you can’t help? Talk to us about it on Social Media using  #MessageMag.

While this man with a withered hand stands there, others in the synagogue are wondering if Jesus will heal him on the Sabbath. What they don’t realize is that Jesus uses the Sabbath to give people who are weary, rest. Who is more weary than individuals like this marginalized man? Do you know of any? How do they fall into this category?

Jesus then does the unthinkable. He asks the man who isn’t even supposed to be in the room to stand up, front and center. How loving it is to give attention to the ignored, a voice to the silenced, and a platform to the underserved. Jesus empowering someone to stand in a place he should be, but policy forbids, is justice.

I must say that it intrigues me to no end that this man had his life changed by following the simple directions of Jesus. It wasn’t a series of positive actions. It wasn’t a history of good behavior. It wasn’t credit for some good deed. It was simply doing what Jesus told him to do. Be like this man. Don’t let your condition dictate your actions. Jesus is a professional at looking beyond our faults and seeing our needs. #RighteousnessByFaith

Jesus then asks them about justice. They have no reply. If Jesus asked you about justice would you have a response? What would it be? Share what you would tell Jesus about love on Social Media using #MessageMag. We’d love to hear from you!

The passion of Christ reaches a fever pitch, and the Bible describes Him as distressed and angry! Why? Because these church people refuse to acknowledge that this alienated and marginalized individual is the one who has been excluded from the privilege of accessing a good life like everyone else. There is no way this still happens in 2020, is there? If so, how? Share your thoughts with us on Social Media using #MessageMag.

Jesus empowers this man to lift his hand and be healed. The saving of this man’s life put Jesus’ life in danger. The same can happen for those who wish to love as Jesus did. When your love steps out in public and is exposed as justice, know that you need not worry about your life because Jesus is saving for you.

Rashad Burden is the pastor of the Mount Olive and Shiloh Seventh-day Adventist Churches in Southern Alabama. 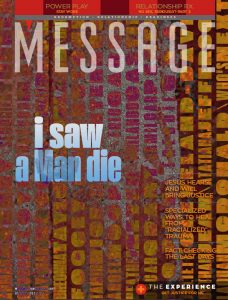 This article is part of our 2020 July / August Issue
Subscribe –>

“Then He spoke a parable to them, that men always ought to pray and not lose heart, saying:

“There was in a certain city a judge who did not fear God nor regard man. Now there was a widow in that city; and she came to him, saying,  ‘Get justice for me from my adversary.’ And he would not for a while; but afterward he said within himself, ‘Though I do not fear God nor regard man, yet because this widow troubles me I will avenge her, lest by her continual coming she weary me.’ ”

Then the Lord said, “Hear what the unjust judge said. And shall God not avenge His own elect who cry out day and night to Him, though He bears long with them? I tell you that He will avenge them speedily. Nevertheless, when the Son of Man comes, will He really find faith on the earth?”

Get Justice for Me – When Heaven Has Enough

Selected from Christ’s Object Lessons, by Ellen G. White, “Shall Not God Avenge His Own?”

The Scriptures describe the condition of the world just before Christ’s second coming. James the apostle pictures the greed and oppression that will prevail. He says, “Go to now, ye rich men, . . . ye have heaped treasure together for the last days. Behold, the hire of the labourers who have reaped down your fields, which is of you kept back by fraud, crieth: and the cries of them which have reaped are entered into the ears of the Lord of sabaoth. Ye have lived in pleasure on the earth, and been wanton. Ye have nourished your hearts, as in a day of slaughter. Ye have condemned and killed the just; and he doth not resist you” James 5:1-6. This is a picture of what exists today. By every species of oppression and extortion, men are piling up colossal fortunes, while the cries of starving humanity are coming up before God” (p. 170).

The world has become bold in transgression of God’s law. Because of His long forbearance, men have trampled upon His authority. They have strengthened one another in oppression and cruelty toward His heritage, saying, “How doth God know? and is there knowledge in the Most High?” Psalm 73:11. But there is a line beyond which they cannot pass. The time is near when they will have reached the prescribed limit. Even now they have almost exceeded the bounds of the long-suffering of God, the limits of His grace, the limits of His mercy. The Lord will interpose to vindicate His own honor, to deliver His people, and to repress the swellings of unrighteousness” (p. 177).

They “shall have judgment without mercy” that have “showed no mercy” (James 2:13.) Not long hence they will stand before the Judge of all the earth, to render an account for the pain they have caused to the bodies and souls of His heritage. They may now indulge in false accusations, they may deride those whom God has appointed to do His work, they may consign His believing ones to prison, to the chain gang, to banishment, to death; but for every pang of anguish, every tear shed, they must answer. God will reward them double for their sins” ( p. 179).

From India, from Africa, from China, from the islands of the sea, from the downtrodden millions of so-called Christian lands, the cry of human woe is ascending to God. That cry will not long be unanswered. God will cleanse the earth from it moral corruption, not by a sea of water as in Noah’s day, but by a sea of fire that cannot be quenched by any human devising”  (p. 179).

This article is part of our 2020 July / August Issue
Subscribe –>

*You can read The Desire of Ages in its entirety online at www.whiteestate.org/onlinebooks.