Jesus is coming again. Your parents said it. Their parents said it. I’m sure the parents before them said the same thing. For what seems like ages we’ve been told, and talked about the soon coming of Jesus Christ. Living in a time when so much takes up the space in our minds how often do we think about this life we’re living being only a portion of what God has for us? Join us as we take on the challenge of being ready for the return of Jesus.

They had to have been astonished. The disciples just saw their teacher, leader, and friend float into the sky and then vanish from sight. To make matters more challenging, they had just been told to wait for the Holy Spirit. Doesn’t it seem like a lot of your relationship with God involves waiting? What have you had to wait on in your walk with Him? Tell us on Social Media using  #MessageMag

While the disciples are standing there staring into the nothingness, two men in white appear and tell them that the same way they saw Jesus go, is the same way He will return. Maybe you think it would have been easier to believe that He was coming back a few days, months, or years later. What about a couple thousand years? Is it harder for you to believe living in 2019? Is it harder to be ready in 2019? Tell us on Social Media using  #MessageMag

After the disciples waited as instructed, they receive the Holy Spirit. Eventually Peter begins to preach about who Jesus was and what He did. That is what each of them did for the rest of their lives. Is that true for each follower of Jesus? Sharing the gospel and living in compromising situations? Is “fun” out of the question? What about the dreams I’m perusing? How can I be ready for Jesus while still dealing with the life in front of me? Have you ever asked any of these questions? Do you have any answers? Please Share on Social Media using #MessageMag

Chronologically speaking, Thessalonians is Paul’s first letter, and Romans is his last. Isn’t it interesting that the tone with which Paul talks about the life of a follower of Jesus changes from “get ready” to “do your best to be at peace with those around you”? The way the Apostle Paul talks about the second coming transitions from how soon Jesus is coming to how sure Jesus’ coming is. Maybe there is a difference in how one lives when something is “soon” in comparison to when it’s “sure.”  Tell us what you think on Social Media using #MessageMag

The Holy Spirit enabled Peter to preach and thousands of people were baptized. Thousands of people now looked forward to the return of Jesus. As the story goes, they didn’t just sit around, but they learned from the apostles. The apostles did the best they could to pass on what Jesus had passed to them. He taught them who they were and how they were to live the life God gave them. Can we be ready for his return by simply showing people a better way to live life? Is that enough? Share your thoughts with us using #MessageMag on FaceBook, Instagram or Twitter.

It is interesting that Luke decided to include the fact that a part of the initiation into the faith was breaking bread, or eating together on a regular basis, with familiar and new faces. When we think about being ready for the coming of Jesus does being surrounded by strangers register as a prerequisite? It makes sense though because the same Jesus they saw ascend into heaven was always surrounded by strangers, doing the best He could to improve their lives.

It has been said, “don’t be so heavenly minded, that you are of no earthly good.” In being ready for the second coming of Jesus we must be heavenly minded and earthly good. God pours into your life and simply desires you to do the same for the rest of His children. He knows that care for others will whittle away the hard parts of your heart and strengthen your faith. Nothing causes more friction than our interaction with people who are different than we are. God knew, to get to the welcome table in Heaven, He had to call us to break bread at tables down here.

Rashad Burden is the pastor of the Mount Olive and Shiloh Seventh-day Adventist Churches in Southern Alabama. 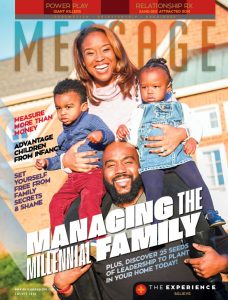 This article is part of our 2019 September / October
Subscribe –>

“And when he had spoken these things, while they beheld, he was taken up; and a cloud received him out of their sight. And while they looked stedfastly toward heaven as he went up, behold, two men stood by them in white apparel; Which also said, Ye men of Galilee, why stand ye gazing up into heaven? this same Jesus, which is taken up from you into heaven, shall so come in like manner as ye have seen him go into heaven.”

Believe: He Will Come Back

From Ellen G. White’s The Desire of Ages, the chapter entitled “To My Father, and Your Father.”*

hrist had ascended to heaven in the form of humanity. The disciples had beheld the cloud receive Him. The same Jesus who had walked and talked and prayed with them; who had broken bread with them; who had been with them in their boats on the lake; and who had that very day toiled with them up the ascent of Olivet,—the same Jesus had now gone to share His Father’s throne. And the angels had assured them that the very One whom they had seen go up into heaven, would come again even as He had ascended.

He will come “with clouds; and every eye shall see Him.” “The Lord Himself shall descend from heaven with a shout, with the voice of the Archangel, and with the trump of God: and the dead in Christ shall rise.” “The Son of man shall come in His glory, and all the holy angels with Him, then shall He sit upon the throne of His glory.” Revelation 1:7; 1 Thessalonians 4:16; Matthew 25:31. Thus will be fulfilled the Lord’s own promise to His disciples: “If I go and prepare a place for you, I will come again, and receive you unto Myself; that where I am, there ye may be also.” John 14:3. Well might the disciples rejoice in the hope of their Lord’s return.

When the disciples went back to Jerusalem, the people looked upon them with amazement. After the trial and crucifixion of Christ, it had been thought that they would appear downcast and ashamed. Their enemies expected to see upon their faces an expression of sorrow and defeat. Instead of this there was only gladness and triumph. Their faces were aglow with a happiness not born of earth. They did not mourn over disappointed hopes, but were full of praise and thanksgiving to God. With rejoicing they told the wonderful story of Christ’s resurrection and His ascension to heaven, and their testimony was received by many.

The disciples no longer had any distrust of the future. They knew that Jesus was in heaven, and that His sympathies were with them still. They knew that they had a friend at the throne of God, and they were eager to present their requests to the Father in the name of Jesus. In solemn awe they bowed in prayer, repeating the assurance, “Whatsoever ye shall ask the Father in My name, He will give it you. Hitherto have ye asked nothing in My name: ask, and ye shall receive, that your joy may be full.” John 16:23, 24. They extended the hand of faith higher and higher, with the mighty argument, “It is Christ that died, yea rather, that is risen again, who is even at the right hand of God, who also maketh intercession for us.” Romans 8:34. And Pentecost brought them fullness of joy in the presence of the Comforter, even as Christ had promised.”

This article is part of our 2019 September / October
Subscribe –>

*You can read The Desire of Ages in its entirety online at www.whiteestate.org/onlinebooks.