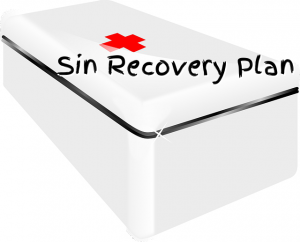 We are focusing on sin recovery principle number three of 12: “We have decided to submit our wills and lives wholeheartedly to God.”

I can attest to the fact that God’s ears are attentive to the prayers of those who love Him. He is ready, willing and available to answer us when we call. The problem is that too many of us neglect to call upon Him. Too many of us put God last on our to-do lists.

Let me tell you a story. I was at a meeting with church leaders this past Saturday night. After several minutes, there was a knock at the door. It was one of our elders (servant leaders who support pastors in facilitating relationship with God among the membership). He said that there were two people down in the sanctuary who were thought to have medical emergencies, but it was evident that they were being oppressed by evil angels (as in Mark 5). They were not sick. So, a group of us armored up, prayed and confessed our sins to God, so we could intervene under the power of the Holy Spirit, and in the authority of Jesus.

To make and incredibly long story short, it was true. These two people were under the direct oppression of evil angels. I will not say all that happened, but suffice it to say, as we all prayed, read Scripture, and sang holy songs in the Sanctuary with them, when it was my time to anoint and pray over one of them, I did so in the spirit of Psalm 61.

I asked the Lord to hear my cry to Him. My heart was overwhelmed as I called on His name for assistance. I spoke of the fact that we already knew that He loves them. Jesus gave His blood for them. I spoke of the fact that we were in His house, and in the memory of the future King David’s disdain for the evil Philistine giant taunting the people of God, I asked God why He was allowing such a thing in His house. I asked Him where we had gone wrong and like Daniel and Isaiah confessed whatever could have been our part. I asked Him to be jealous over His honor and to get glory in the situation by breaking the yoke and set that captive free. I knew (we all did) that there was safety under God’s wings of protection. We had full faith and assurance that God wanted to deliver those dear ones to be in control of themselves. I asked the Lord to forgive them for whatever they had done, which may have created a foothold in their lives for the enemy to take over. I asked Him to teach them to love Him and serve Him. In the spirit of verse seven, I asked Him to protect and reign over them. I could not hear what the other team of elders were saying with the other person, but I am sure it was very similar. We love and believe in the same God.

I am delighted to report to you that God came through. (What did you think would happen?) He delivered those two people whom He loves so dearly. He manifested His pleasure in giving people the opportunity to know Him and live eternally without the devil forcing them to do his evil bidding. The key to their deliverance was the authority of King Jesus who has repeatedly defeated the devil on many fronts, God’s people (in this case a few leaders) making certain that we were in full submission to Him ourselves before we even attempted to step on that battlefield, and simply asking God to do what we already knew He wanted to do.

If you want to have victory in your life, ask God to teach you whole life submission to Him.

Guess what else I asked God to do? In the spirit of verse eight, I asked Him to teach those folks to praise Him for His goodness to them and to serve Him. Whenever God is so gracious to condescend to help us, we must be certain to thank and praise Him. I don’t know how many of us realize this, but God is very busy. He has a universe to run. He is kind enough to attend to our needs and some of our wants too.

If God could deliver those dear children of His from this terrible ordeal, what in your life is too difficult for Him? Nothing.